Often times, people associate moles with rodents, which couldn’t be farther from the truth. They are mammals of the order Eulipotyphia, which also includes hedgehogs and shrews. They are solitary animals that live a mostly subterranean life and are found throughout the United States. They are perfectly built for this type of life.

They are a small animal that reaches sized of around 5 to 8 inches long with gray or brown fur, depending on the species. Their bodies are built for tunneling and digging with large front feet and claws and broad necks and strong shoulders (for their size). They have long snouts that are hairless, that aids in the detection of prey items. They also have light-sensitive eyes covered by fur and ears that are not visible.

What kinds of damage do moles cause? 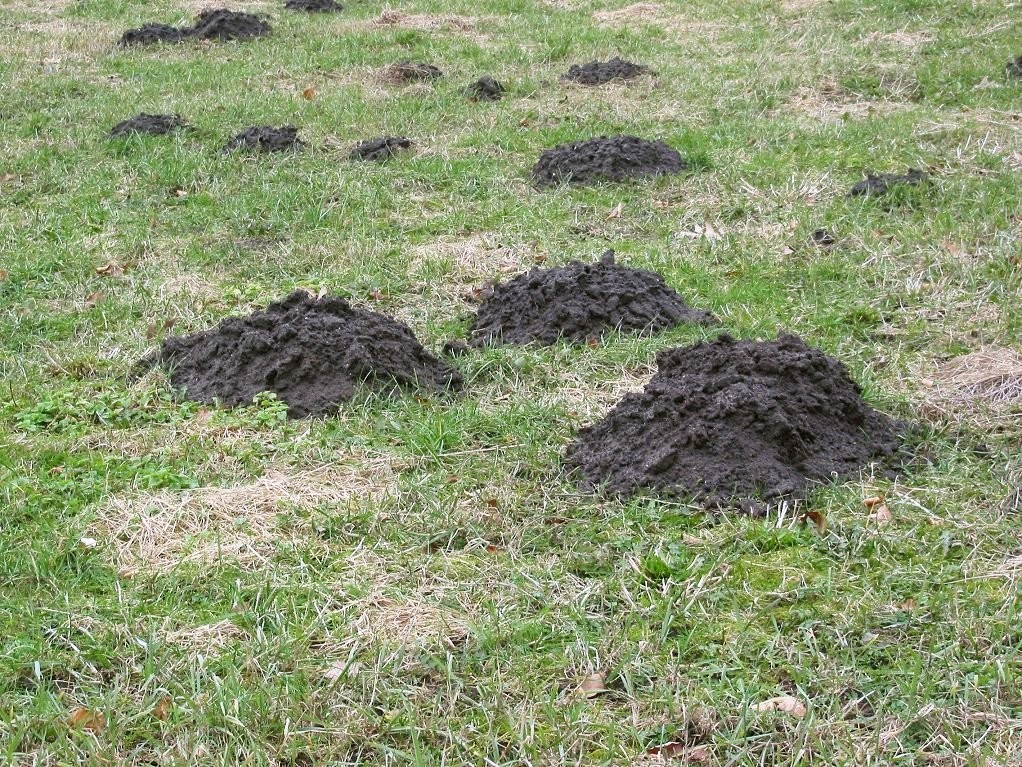 Moles burrow underground, primarily, looking for food. It is very unlikely that a person will ever see the actual animal, but they will definitely see the damage moles leave in their wake. They are likely to frequent yards, gardens, flowerbeds, and other landscaping. They will cause a host of damage such as mounds, ridges, and tunnels of dirt around the yard, and up-rooting grass and other plants. They pose a far greater risk of damaging plants than they do of biting someone or spreading diseases.

Moles will dig tunnels between 6 and 24 inches underground which the use to rear their young and for shelter during extreme weather conditions. These tunnels are dug at a rate of about 12 to 15 feet per hour. They do not normally share their tunneling networks that they have created but other nuisance animals, like rats, shrews, voles, and pocket gophers, have been known to go into these tunnels in search of food as well.

Their tunneling habits are what cause the most complaints by property owners. These animals create extensive networks as they tunnel close to the surface in search of food. They can dig these shallow tunnels at a rate of about a foot per minute. Their search for food will result in raised ground and dirt mounds to be left behind. It will also cause the ground to feel soft and almost spongy as it is walked across.

It is best to take care of a mole problem as quickly as possible to minimize property damages.

Moles in the Garden

Moles In The Yard

Differences Between Voles and Moles

The Diet Of Moles

How do people get rid of moles?

This is a tricky problem to deal with because moles dig a variety of tunnels and none of them look different from others. Also, because they remain underground and are rarely seen, an expert understanding of these animals is necessary to remove them successfully. Trapping is the most effective way to get rid of nuisance moles, but the traps must be placed in areas that will maximize their effectiveness. Employing the assistance of professionals is the best idea because they will be armed with the experience to pinpoint the best places to set these traps.

Trapping any sort of animal can be a difficult thing to do, especially when there are limited options otherwise. When it comes to moles, that is the case and trapping is the best option to remove these pests. They are a difficult animal to deal with because all that a person ever sees is the destruction they leave behind in a yard, garden, or flowerbed.

When should a professional be called?

Professional pest removal experts can be called for a variety of reasons when it comes to dealing with moles. Homeowners will be able to purchase traps from a professional that they will be able to deploy themselves. The pros will also be able to advise them on the best ways to use them and the overall best traps to use. Ultimately, the pros can also be called to take care of the problem for a homeowner so that they can be sure that it is taken care of.

Why should a professional be called?

Professional removal experts are going to know exactly how to handle the difficulties that moles present. They will be able to identify the best areas in which to set up the traps. Experts will also know how to assess the situation at hand and which process is going to be the most successful. Professionals are also going to have access to the latest traps that are environmentally friendly and humane for the moles.

It will take an educated and well-trained professional to identify the type of animal that is plaguing a given piece of property. They will be able to look at the damage and signs left behind and tell what type of animal it is. This is necessary because moles are rarely seen above ground and all that is visible is the damage they do.

They can dig at all time of the day, whether they are noticed or not. It is important to call in a local professional as soon as the problem is realized so that it doesn’t get out of control. The damage they do can cause a lot of problems across an entire property and a professional is going to be a property owner’s best solution to mitigate the extent of the damage.

How can a professional help a homeowner?